Nowhere else on Earth is quite so associated with castles as the United Kingdom. Across Great Britain and Northern Ireland, enormous fortifications rise from the land. Sometimes the castles are grand and stately, conjuring romantic notions; at other times, they carry a sinister air that offers a sense of just how precarious life could be in bygone eras that were so often marred by war.

It is no exaggeration to say that the entirety of British and Irish history can be surveyed through castles. Castles’ defensive and military qualities mean that they were built to endure, and they’re often the only tangible connection we have to a past that has faded from view.

The following blog will select ten of our favourite medieval British castles to visit. Records suggest that over 800 extant castles (in varying states of preservation) exist in the UK, so our list is only scratching the surface of this fascinating part of history.

However, we hope we give you plenty of inspiration for exploring the UK’s historic built environment. If you are travelling in England, please browse our selection of Private Tours of South East England, which include some of the castles you’ll discover below.

The tower served as an official royal residence. However, today it is most famous as a prison and one that has housed numerous important historical figures, including Anne Boleyn, Thomas Moore, and, more recently, Rudolf Hess.

Visit the castle today to come face-to-face with an array of iconic symbols of England, such the today’s famous resident ravens, the crown jewels, and a team of Beefeater guards in historical finery.

If you want to see the Tower of London and a range of other London landmarks in the company of an expert local guide, join us for our Private Walking Tour of London.

One of our very favourite castles and one that’s continuously a highlight for our guests, Leeds Castle has been described as “the loveliest castle in the world.”

Having been standing for over 600 years and owned by no less than six English queens, the Leeds Castle walls would have some tales to tell if they could talk!

Not only is Leeds Castle a wonder to behold, but exquisite Kent countryside also surrounds it.

Visit today to uncover the story of medieval and Tudor England. We offer a Private Tour of Leeds Castle that conveniently departs from London.

One of Scotland’s most recognisable sites, the towering walls of Edinburgh Castle loom over central Edinburgh from the volcanic Castle Rock, giving the entire city the kind of timeless quality normally associated with the cities of Italy or Greece.

Scotland has no shortage of imposing castles, but there’s none more icon dramatic than Edinburgh. Located a 20-minute walk from Waverly Street Station, this is also a uniquely accessible castle.

Visit today for highlights such as the breathtaking armoury, St. Margaret’s chapel, and the Stone of Destiny.

A UNESCO World Site, Caernarfon Castle was built between the 13th and 14th centuries on the orders of King Edward I during his conquest of Wales.

The walls of this dramatic fortification are said to have been modelled on the walls of Constantinople (Istanbul), then the capital of Byzantium, the Eastern Roman Empire.

The castle offers amazing views from its parapets.

One of the best examples of Norman architecture left in England, Arundel Castle is a fantastic day out for the entire family. Besieged during two civil wars, The Anarchy and the English Civil War, and has hosted an array of famous guests from King Henry VIII to Queen Victoria, the story of Arundel Castle captures all the tumult of English history.

Read our Guide to Arundel Castle for an exploration of the site’s history and if you’d like to see it for yourself, consider joining our Private Tour of Arundel Castle.

With its origins in Roman Britain, the Cornish castle of Tintagel has as cinematic a setting as you’re ever likely to find. Perched on the cliffs of North Cornwall, Tintagel Castle has long been associated with the mythic stories of King Arthur and his Knights of the Round Table.

Visit today and walk across the castle’s vertiginous footbridge to daydream about the chivalric stories of old. Nearby the castle, you’ll even find Merlin’s Cave!

The official residence of the British Royal Family, Windsor Castle, was built to ensure Norman dominance in England.

During the English Civil War, the castle was used as a base for the Parliamentary Forces and as a prison to house the soon-to-be-executed Charles I. In its recent history, the castle is most widely known for being the main residence of Queen Elizabeth II from 2011 to 2022.

If you’re fascinated by the British monarchy or a fan of the hit show The Crown, consider booking a place on our Private Tour of Royal London.

Another coastal fortification with Roman origins, Dover Castle, has evolved over the centuries to serve many roles, including being the location of a Roman lighthouse (still standing today) and an important garrison during the Napoleonic Wars and World War Two.

Join John England Tours for a Private Tour of Dover Castle to learn the castle’s winding history. You can also upgrade your tour to include a visit to the nearby White Cliffs of Dover, one of Britain’s most iconic sights.

One of England’s best-preserved medieval castles, Warwick Castle is expansive. While some castles on this list can be explored comfortably within two or three hours, Warwick Castle could take you all day.

Filled with historical items and furnishings, Warwick Castle will delight any history lover, and the playground and models in historical dress will keep it fun for younger guests!

Perhaps the spookiest entry on our list, Dunluce Castle is a haunting site on the edge of Antrim’s famous cliffs. In fact, the castle was built so close to the edge that one stormy night the castle’s kitchen collapsed and fell into the sea below.

Whether truth or legend, the castle’s position above the ever-belligerent Irish Sea and the regular howling of the winds as they better nearby coves and caves give this place an unusual aura, it’s undoubtedly one of the region’s highlights, along with the fantastic Giant’s Causeway and enchanting Carrick-a-Rede Rope Bridge.

What is a Good Primer on Medieval History?

For an excellent single-volume overview of the medieval period, seek Dan Jones’ Powers and Thrones: A New History of the Middle Ages. This 2021 work of popular history has the pace of a novel but also offers surprising depth – a winner for new medieval history fans.

To get a feel for what life was like during the middle ages, try Ian Mortimer’s delightful The Time Traveler’s Guide to Medieval England: A Handbook for Visitors to the Fourteenth Century or Life in a Medieval City by respected historians Joseph and Frances Gies.

For those of you who enjoy such social histories that transport you to a bygone age, please consider joining us for our Private Medieval England Day Tour – visit the houses of monarchs and knights in the historic Weald of Kent!

If you’re looking for a book that is both detailed and richly illustrated, you cannot go wrong with The Oxford Illustrated History of Medieval England.

For castles specifically, publishers Collins does a great range of guides. Released on a country-by-country basis, there are guides available for England, Scotland, and Ireland. Those exploring Welsh history should turn to John R. Kenyon’s The Medieval Castles of Wales.

Finally, for those who prefer historical fiction to historical non-fiction, the greatest historical series set in medieval Britain has to go to Dorothy Dunnett’s Lymond Chronicles, with Hilary Mantel’s Wolf Hall coming a close second.

One event in medieval English history that’s inspired its fair share of dramatic retellings is the murder of Thomas Becket. Fans of acting heavyweights Richard Burton and Peter O’Toole will undoubtedly have seen 1964’s Oscar-winning Becket. If you’re curious to understand the facts behind this earthshaking assassination, book a spot on our Private Tour of Medieval Canterbury.

This brings our list of fantastic medieval castles in Britain to an end. We hope we’ve inspired you to begin planning your next history-focused trip! If you have any questions about our tours or services, please get in touch. 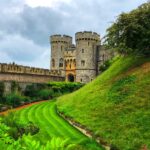 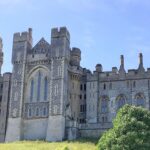 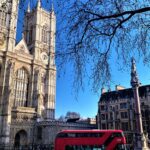 Locations From The Crown You Can Visit
November 7, 2022John Coupland
We use cookies on our website to give you the most relevant experience by remembering your preferences and repeat visits. By clicking “Accept All”, you consent to the use of ALL the cookies. However, you may visit "Cookie Settings" to provide a controlled consent.
Cookie SettingsAccept All
Manage consent