When you book with an account, you will be able to track your payment status, track the confirmation and you can also rate the tour after you finished the tour.
Sign Up
2104
OverviewWhat's IncludedWhat to ExpectReviews

This is a unique, off-the-beaten-track, private tour that your family and friends back home will wish they could do too!

Most visitors to London see the main sites: Buckingham Palace, The Tower of London, Windsor Castle and other popular, well-trodden routes. Of course, there’s nothing wrong with that, but why miss an experience that offers something completely different? In just one day, you can leave the city behind and experience old England. Immerse yourself in the grandeur of its country estates, the atmosphere and magic of its castles, the still beauty of the rolling English countryside. (Enthusiasts of medieval history may also wish to check out our Private Tour to Medieval Canterbury.)

Medieval England is within reach!

John delivers private tours in London and in Kent’s pristine, natural landscapes that have led to the county being referred to as ‘The Garden of England.’ Here, you enjoy the best of both worlds.

Additionally, John shares a world that captures the atmosphere of medieval England, bringing history into focus like never before. Away from the crowds of London, you’ll discover a part of the real England many visitors miss!

In the heart of the scenic Weald of Kent are hidden two gems of the English historical landscape. As a local guide with many years of experience, John will help you unlock their secrets.

Ightham Mote – Described by David Starkey, (Britain’s leading historian), as “One of the most beautiful and interesting of English country houses.”

This house is nearly 700 years old and has been owned by various medieval knights, courtiers in King Henry VIII’s court, and wealthy Victorians. Now managed by the National Trust, this precious building has been lovingly restored and maintained. See the house’s moat, chapel and Great Hall. Walk through the quaint courtyard and feel the atmosphere of the vaulted crypt. Inside the home, stare in wonder at a ceiling painted during Tudor times and even catch sight of a Grade I listed dog kennel!

Penshurst Place – A spectacular, remote, film location for productions such as ‘Mary Queen of Scots’, ‘The Other Boleyn Girl’, ‘Wolf Hall’ and more.

A former hunting lodge owned by King Henry VIII (pinched from Edward Stafford, 3rd Duke of Buckingham, who he had executed!), it has lovely paintings, furniture and artefacts, including a medieval hall, enabling you to step into the 14th century. This fabulous house has been owned by the Sidney family for 500 years consecutively. (Penshurst Place is open from the end of March to the end of October only. If you’re planning your visit outside of these months, ask us to make other recommendations).

Scotney Castle – Visit the ruins of this 14th-century medieval castle which has rooms that are still accessible. The estate includes the Victorian ‘New Castle’. It has gardens which are an outstanding example of the picturesque style, with the beautiful backdrop of the fairy tale castle ruin. A prominent former owner was Christopher Hussey, the architectural editor at Country Life magazine, who helped preserve this and many other significant properties in England.

Bodium Castle – Touring with kids? Now here’s an opportunity for them to really experience medieval England with you! For an extra nominal charge, (as it’s further away), we can swap one of the locations with, for example, medieval Bodium Castle in East Sussex. – This ruined castle is full of grandeur, including spiral staircases, battlements and a portcullis. An exciting destination for all the family. As the National Trust writes, “This is a place where you can relive your childhood memories and let your imagination run riot.”

These are just two suggested options: Please request a personalised tour should you wish to see Scotney Castle, Bodium Castle, or another historic site in Kent, as they are further away and the tour will cost a little more. You may also want to consider our tour of Rochester, a town which boasts a medieval castle and a Dickensian town! You can contact us here.

Medieval Fairs and Jousting – Subject to dates and availability, medieval fairs and jousting are held during the summer months. As they are, of course, fun and popular, please enquire for more information.

Guest testimonial. – “…A few days later I took a second tour with John and we visited Ightham Mote and Penshurst Place. Ightham Mote is a home built in the thirteenth century with a moat, lake, and gardens. I really enjoyed my visit there. Afterwards, we visited Penshurst Place which is a much larger home. It has very extensive and beautiful gardens which were just coming into bloom when I was there. I enjoyed my visit there as well.”

#LetLondonBreathe and avoid the stresses of the city centre’s notoriously heavy traffic. – John will collect you by car at Bromley South station, in London’s suburbs, where your private tour starts. He will drive you through country lanes in the scenic Kent countryside and on to your chosen locations. 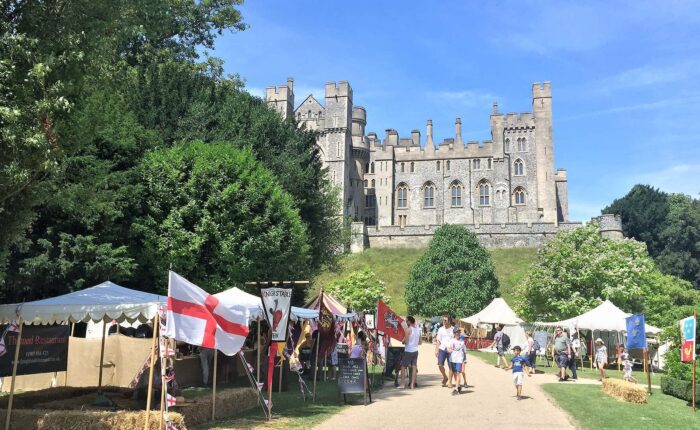 FromGBP£215
0
We use cookies on our website to give you the most relevant experience by remembering your preferences and repeat visits. By clicking “Accept All”, you consent to the use of ALL the cookies. However, you may visit "Cookie Settings" to provide a controlled consent.
Cookie SettingsAccept All
Manage consent